They say adversity makes strange bedfellows. Indeed, throughout history, there are countless examples of unlikely alliances; uneasy coalitions of the most incongruous forces, bound together through mutual gain (or at least survival) in the face of some epic calamity.

How many modern states would not exist if sparring tribes hadn’t joined together to defeat invading forces?

Would Dan Humphrey and Blair Waldorf have ever discovered their mutual love of classic cinema, of they’d never united to help save Serena from Juliet Sharp?

Yes, there is something gloriously unifying about disaster.

Just a few years ago, behavioural scientists were worried we were all becoming a bit too selfish: shockingly, all that time spent curating the perfect life on social media was turning us all into narcissists. So it’s perhaps lucky – fortunate, even – that we’ve had a big ol’ global pandemic come along as the great equaliser, bringing back the camaraderie.

COVID has replaced the weather as the great small talk topic of our time. Run out of banter? “How ’bout those case numbers…” Run into another school parent whose name you’ve forgotten at the supermarket? “Let me tell you what happened to my friend after their second Pfizer…”

It’s also born a resurgence in altruism. Asking anyone and everyone whether they’re OK because you know they most probably aren’t, but perhaps through their suffering you can validate your own… or at the very least enjoy some schadenfreude that even though things kinda suck, it could always be worse. People may be stressed, but they’re generally friendlier – as though the realisation that there is quite literally no one who can honestly say they’re thriving means there’s absolutely nothing for anyone to prove.

It’s with this undercurrent of bonhomie that I personally received an emotional lifeline from the most unlikely of places. A text message, enquiring as to how I was going during lockdown (It’s the worst! Thanks for asking!), and an offer to call if ever I wanted to talk. Curious as to how such a generous welfare check could come from an unknown number, I scrolled to the bottom to find out its source – only to be left even more confused. It was a sales assistant from a certain designer store, from which I had made a handbag purchase back when I mistakenly believed the next year would bring me ample functions to attend that required such immaculate leather goods. Lack of foresight, I believe they call it.

I’m unsure whether all customers received such a message in some sort of luxury spam mail out, or whether my demeanour during the transaction two years ago has put me on some sort of special “fragile, but prone to bouts of largesse” type register. Regardless, I was struck by the genius marketing move on behalf of the store, because I for one have since spent a lot of time working out whether the matelasse or quilted leather would look better with my pandemic uniform of tracksuit pants and ironic activewear.

And while I am yet to take the sales assistant up on her very kind offer to reach out, her mental health check has had the desired effect – the knowledge she is there with a shoulder to cry on, and perhaps a new range of cheeky clutches, when Westfield eventually reopens, is just the encouragement I need to get through the next 17, 456 weeks of lockdown. 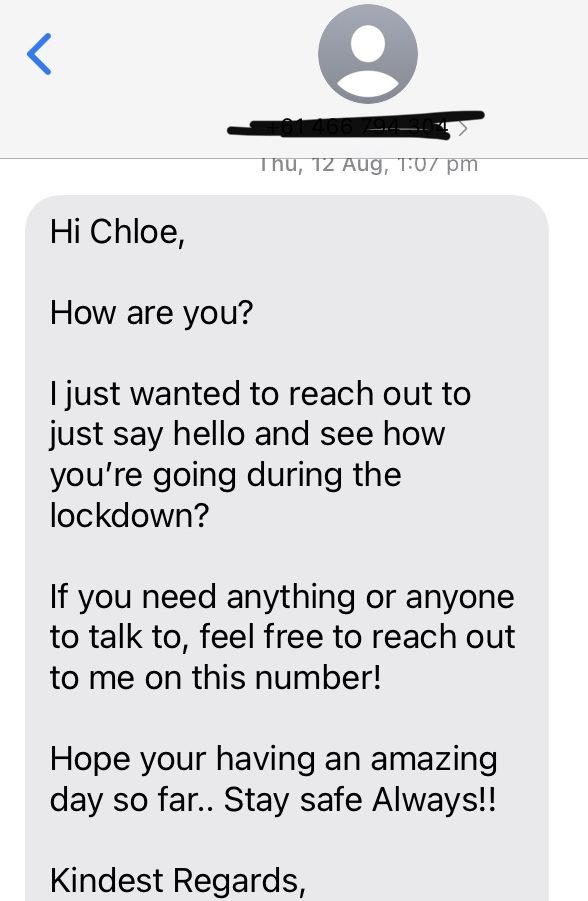 Previous Post: « Is this the Golden Age of the Dobber?