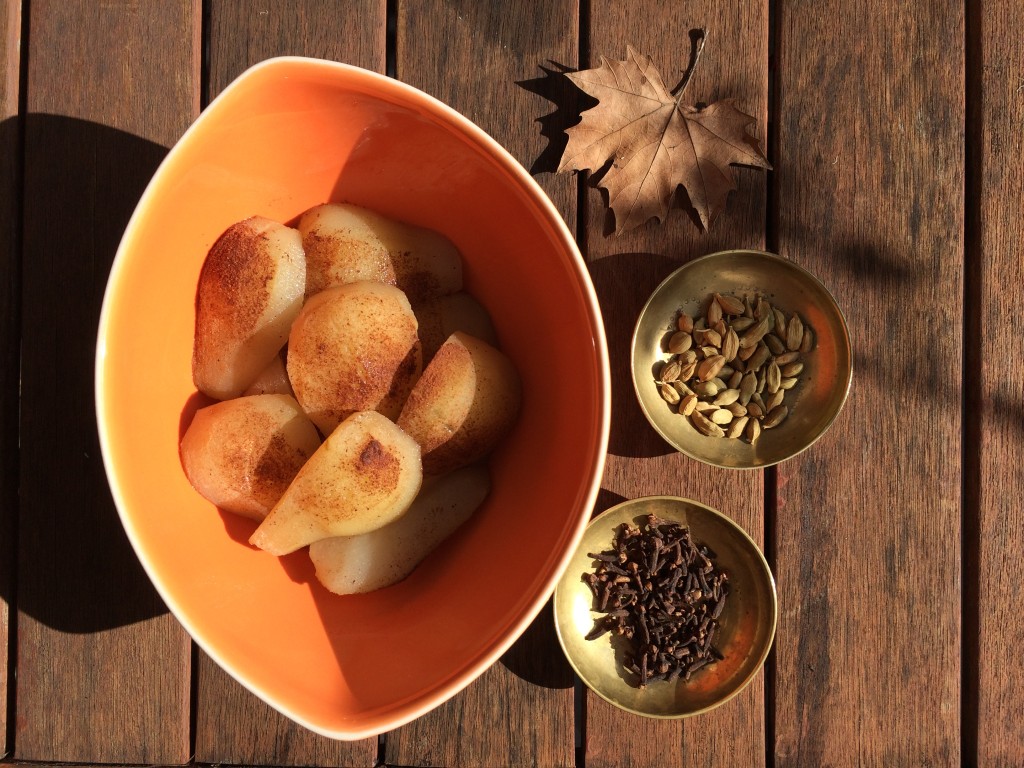 Winter fruit gets a bad rap, in my opinion. Sure, summer fruit is undeniably sexier – luscious stone fruit, juicy berries, and of course everyone’s favourite, MANGOES – but with a bit of TLC, winter fruit is like curling up on the couch in your favourite PJs to watch a Ryan Gosling movie. Just makes you feel all warm inside.

Pears are the perfect example. Sure, a plain old pear may not be all that interesting, but coupled with some warming winter spices and baked to perfection, you can take them from the mundane to the sublime. Here I’ve used cinnamon, cloves and cardamom for a spicy hit that takes its cues from Middle Eastern cuisine. After all, in the immortal words of Jerry Seinfeld: “People love cinnamon. It should be on tables at restaurants along with salt and pepper. Anytime anyone says, ‘Oh this is so good, what’s in it?’ The answer invariably comes back, ‘Cinnamon.'”

Some people poach their pears, but I find poaching can be a tricky business – keep the pears whole, and it’s hard to ensure they’re cooked all the way through, while if you cut them into pieces then they have a tendency to get waterlogged. This method of baking is essentially steaming the pears so they get the full hit of the spices without getting soggy.

I prefer to use a firmer pear variety like Packham as they hold their form more. You’re not making baby food, you want the pears to keep their shape and give you something substantial to bite into.

I really like these on my muesli of a morning (try my Healthy Baked Muesli), but they also make a lovely dessert with a dollop of Greek yogurt or cream, and some lightly toasted walnuts.

Four as a dessert

2. Core and quarter your pears, and lay the pieces in a shallow baking dish.

3. Add around 1cm of water to the pan. Pears shouldn’t be ‘floating’ in the liquid, the water should come up around them.

4. Scatter the cinnamon stick, cloves and cardamom around the pears so they’re floating in the water. Then sprinkle the ground cinnamon on top of the pears.

5. Cover the baking pan tightly with foil. Bake for 45 minutes until pears are soft (check with a knife or skewer) but still holding their form.